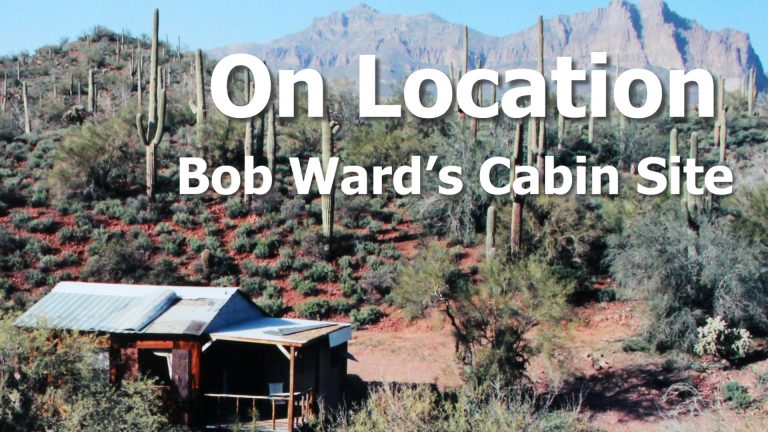 In December 2019, Jack San Felice, Dave Jones, Scott Giles, and Dave Guggisberg (myself) visited this area of the Superstition Mountains. Here Jack told us many fascinating stories of some of the early prospectors. Bob Ward being the main one. The main geo-locations for this trip are listed at the end of next article: Henley’s Arch (Ward’s Cabin Outing, Part 2).

Below are some additional views of the area we visited. When you visit this area and all areas of the Superstition Mountains, if you cross a fence or a gate, be sure to show respect by closing it behind you. Here we are at the site of Ward’s Cabin where Jack is showing Dave and Scott pictures of Ward’s cabin. It is claimed that many of these old prospector cabins became sites of vagrants, drug parties and vandalism. The Forest Service and BLM have torn down most of them and removed any map markings for their locations in current editions of their maps. This is also true of Ward’s Cabin. So, in respect of the Forest Service and BLM, I am not listing the exact location of Ward’s cabin. It is in the vicinity of the trails on the maps above.

This part of the foundation of Ward’s cabin is all that the BLM left. Tom Kollenborn continues in his 2016 post: “Many prospectors have laid claim to this cabin since his (Tacke’s) death. The list is long and enduring. Some of the names I have known was Adair, DeCook, Ward and a couple of others. This cabin verily survived into the twentieth century when it was torn down to discourage people using it.” https://www.facebook.com/Tom.Kollenborn/photos/one-of-those-old-nostalgic-and-rustic-old-prospectors-cabins-aw-tacke-constructe/1452333051450549/

Near Ward’s cabin there is dump or waste from a covered-up mine shaft. (With Jack San Felice) When the Forest Service and BLM removed Ward’s cabin, they also broke up the cement that held the boots of some of the prospectors that came to the cabin. Story goes that their boots were so worn out that they cemented them and left them with their names to say “I was here.” These are some of the broken pieces of cement. All that is left.