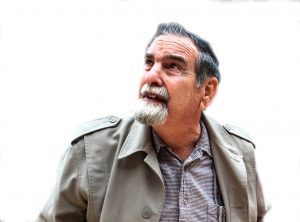 Larry Hedrick is the co-founder of the Superstition Mountain Historical Society. Widely traveled, Larry came to Arizona in 1957 from his native state of Oklahoma, and settled permanently in the state in 1966.

Larry Hedrick also dedicated more than thirty-five years to the concept and building of a museum devoted to the preservation of the history and lore of Superstition Mountain and the Lost Dutchman Mine. I worked closely with Larry during the first ten years and witnessed his dedication, devotion and hard work to see the concept materialize into its building at Goldfield Ghost Town on January 31, 1990. Finally, the museum had a building. This required ten years of hard work and dedication to a cause. I am certain it would have never happened without Larry Hedrick working closely with Bob Schoose to make this dream come true. We all stood proudly in front of the new museum building on January 31, 1990. Again, it was Larry Hedrick who pursued the land transfers that eventually led to the money and property the museum board eventually acquired. This story is a reminder of just what goes into a dream and an idea that it is designed to protect and preserve the history of any given area or event.

What are the most interesting things you have encountered in the superstitions?

“When I met Tom Kollenborn in 1975, we begin taking horseback rides into the Superstitions and then did runs out in Rogers Canyon. You could actually see the fingerprints in the mud over the rocks where treasure hunters and adventurers built the walls and we would run across abandoned camps with food still in the pots. People just gave up and just left everything there. There were cups inside the tents that collapsed. All sorts of stuff like that.”

“Probably one of the most interesting things, up on Bluff Springs Mountain there were spikes driven into the walls with rings in them and this supposedly was for the Spaniards. Of course the Bluff Springs Mountain and all of the cliffs are straight up. It was a great fortification. It would be easy to defend. There are just all kinds of things like that out there if you just look.”

What are you most proud of in relationship to Superstitions and making Mysteries Of The Superstition Mountains videos?

“Well I didn’t think much about my own stories and here I am meeting James Stewart and those guys out there on mountain road. As I look back on it, these are some great stories. Like the day they were filming and getting ready to blow up that village. That was quite an experience.”  (Giant Pagoda https://youtu.be/zkXAiI1lfQo)

“My buddy, Hank Brown, who had found old Hacksaw Tom. He dug up the satchel that had all that equipment in it including the sawed-off shotgun and stuff like that which is now in the museum.” (https://youtu.be/eq0lCDjm6Kk)