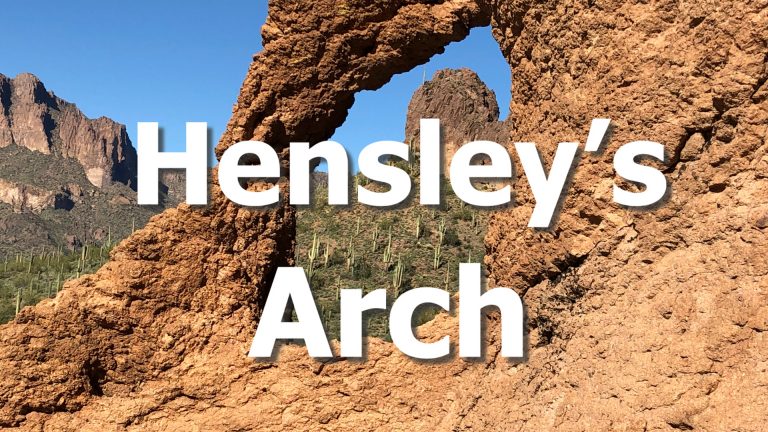 In December 2019, Jack San Felice, Dave Jones, Scott Giles, and Dave Guggisberg (myself) visited this area of the Superstition Mountains. Here is part 2 of our outing. The main geo-locations for this trip are listed at the end of this article.

After Jack and Dave finished videoing the episode of Ward’s Cabin (Ward’s Cabin Outing Part 1), we visited the site of Hensley’s Cabin. The geo-location is at the end of the article. Here is all that remains of Hensley’s cabin after it was torn down – the front door step. Not much is found about Don Hensley other than he tried to take over many of the mining claims in this area by patenting them. One other claim to fame by Don Henley is an arch named after him which is northeast of his cabin site. So, of course we had to visit the arch.

At first, we were hoping to visit it “virtually” via Scott’s drone.

From the site of Hensley’s cabin, Scott is flying his drone up to Hensley’s Arch. He successfully flew to the arch and through it, but crashed it as it exited the Arch. So, we made a trip to the arch, of course. This is a view of Hensley’s arch. The location is in the geo-locations at the end of this article. For some great video footage of the drone crash and then successfully flying through the arch see Hensley’s Arch episode: https://youtu.be/YYldgTfE974 . Here is Scott’s second and successful trip through the arch. The sun peeking through the arch. View of the valley through the arch. Where you park to hike up to the arch. After the drone’s successful trip through the arch, we visited some additional sites. This depression is where legend says there was a church. The story goes that the priests would gather the Indians here to teach them about the bible. It is also rumored that there is some gold or silver underneath this depression and that a body is buried there as well. One version is that it is the body of one of the priests. The depression was created by prospectors looking for the gold and silver. Jack telling Dave about the church and the Indians. When you hike this area, please watch where you step. There are many open mine shafts – some marked and fenced, some small and hard to see. This is a mine shaft that had a grate put over it and then covered with the dump or waste from the mine. A corner has washed out exposing the grate. Even with a strong flashlight, you cannot see the bottom. From timing a rock drop, it is likely to be around 60 to 100 feet deep. The shaft is quite large in diameter, likely around 10 – 12 feet. Here is another type of mine. This one was chasing a potential vein with a backhoe. See the geo-location below. This was a great outing and we all had a great time. Use the geo-location points below to explore and visit this fascinating area.