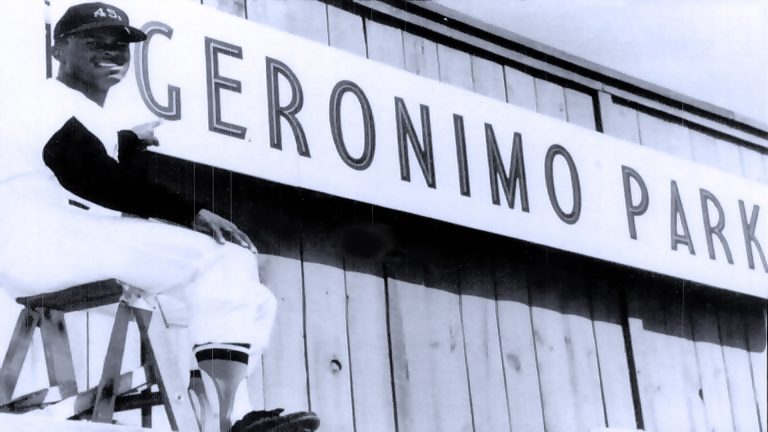 Baseball has a very long and quirky history. Many splinters and odd twists. The episode of Geronimo Park is one of those strange baseball splinter stories. See Hank Sheffer tell the full story here https://youtu.be/yc51pNqpbBY. Here are some additional highlights for your delight.

The basic story is that Houston and several cities across the US petitioned the MLB for baseball teams and were declined. So, Houston and several other cities in Texas decided to start their own professional baseball league. At which point Houston was given a team and New York another team: the Mets. “Professional baseball in Houston goes back to 1888, with the Babies in the Texas League. The name changed several times, becoming the Buffaloes in 1896, and then the Buffs in 1959. The Houston Sports Association bought the team in 1961 when the Houston Colt .45s were created. The Buffs became Houston’s top minor league team, moving to Oklahoma City in 1962 when the Colts began play in the National League.” https://climbingtalshill.com/2015/02/14/houston-colt-45s-forgotten-team/

So, one major question is how did they come up with the name Colt .45s?

“With a team coming to town [Houston], the owners needed a name. So, they held a ‘Name the Team’ contest that allowed Houstonians to submit their ideas. William Irving Neder’s submission of the Colt .45s eventually won. Neder stated that the name fit the frontier image of Texas and that the famous gun played an important role in the history of the American West. The team leadership also announced that the Colt .45s colors would consist of navy and orange.” https://tshaonline.org/handbook/online/articles/xoh08 Of course, as explained the episode, many of the player were not happy with Apache Junction. One additional interesting story is about the outfielders:

“Many of the outfielders complained in spring training that the Arizona sky made it hard to track fly balls. One who did not was Al Spangler. A Duke graduate he dismissed the issue saying, ‘I would merely allow for the force of impact and the rate of descent and could catch the ball while making change for a $20 bill.’ Then in the first game he let one ball fall in front of him and another behind him. When asked to explain what happened Spangler said, ‘I forgot to figure on the curvature of the Earth.’” https://calltothepen.com/2012/02/15/the-houston-colt-45s-first-spring-training/ The Colt .45s left Geronimo after 1963 and changed their name to the Astro’s. It is rumored that part of the name change decision was due to Colt Industries objecting to the name and also asking for royalties.

Location of Geronimo Park was at the current location of the Loyal Order of Moose Lodge.