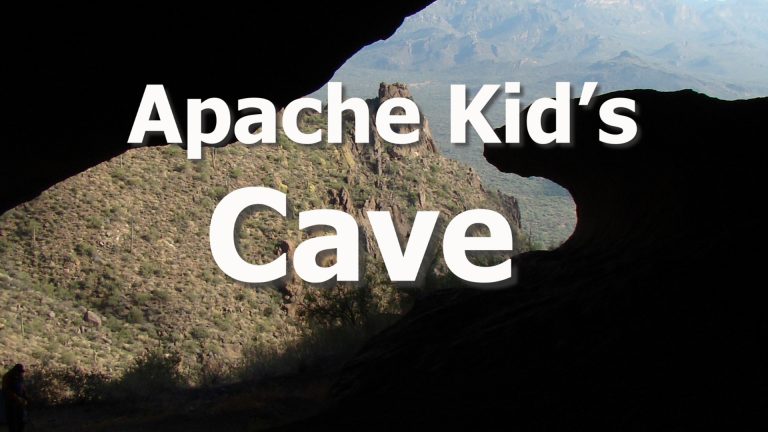 Yes, another outing and another drone crash.

David Jones, Jane Jones, Scott Giles and myself went out to Carney Springs Road to film the B-rolls for the episode of Apache Kid’s Cave: https://youtu.be/2NzSvct_G70 . Our intent was to have Scott fly the drone from the parking lot or a spot near by up to the cave. We had no intention of hiking to the cave that day.

But reality often changes one’s plans. With some wind gusts, cactuses and attempts to get some really spectacular footage, the drone crashed at the entrance to the cave. So, now we hike – which gave us the opportunity to provide you with some great pictures, GPS coordinates and route maps as we hiked to the cave to retrieve the drone.

From a small bluff to the east of the main Carney Springs parking area, these are the views of Apache Kid’s Cave. The current official name by the US Forest Service is Wave Cave (you will see why shortly): The hiking route shown below, in two different views, are from my Garmin GPSmap 60CSx, so the route points are very accurate. This route was then plotted on a Google Earth map (not Google Maps). The route is from where we launched the drone to the cave. So, if you park in Carney Springs parking lot, you will start a bit to the west of our start point, but will quickly intersect our route. For those who like a bit more technical information, here is the start point near Carney Springs Road and the end point at Wave Cave. The points are in both decimal degrees and degrees with decimal minutes

So that was the simple story. ADDITIONALLY, as we hiked up to get the drone, about 1/2 way up, we met a hiker on his way down. He had rescued Scott’s drone. I did not ask Shawn for his permission to use his full name or picture, but way to go Shawn!! And Thanks!!

Scott decided to go for two. After all, how tough could it be from 1/2 way there – so much closer. After some great footage,

So off I went to rescue crash #2. The gang decided to stay put and I got a call when I was around 3/4 of the way there that someone had rescued the drone and set it upright so Scott could launch it remotely from the cave entrance. This time I heard the drone as it whizzed by on the way back to where the gang was. At this point, I decided to finish the hike, finish the tracks, get good GPS coordinates and some additional pictures.

The side canyons has huge boulders: The last several hundred feet are dirt strewn with gravel and rocks, slippery. It is at a 40 – 45-degree angle in many places – hands and feet scrambling. WHY IT IS CALLED THE WAVE CAVE: It is a big wave The wave is a big, solid rock. Here is the top: The floor is soft silt type dirt. The dark spots are the water seepage locations that made it habitable for the Apache Kid. While the cave is hard to see from the valley, it has a great view of the valley. This is a great hike in the Superstitions. As with all hikes in the desert, come prepared. Even though I wasn’t planning on hiking, I knew it might be necessary. I brought my:

And I had a successful outing.

What did I not bring that I wish I had brought:

Enjoy this hike and be prepared so that you will have a successful outing as well.